"Hanging" out at the dropzone

Posted by Ria Moothilal on Friday, March 26, 2010
Sometimes you just cant plan shit this good. On Monday I went to Delta, along with my new camera to hopefully get some cool pics. Lee and Louis went out to do a two way so I thought I'd get some pics of the two of them coming in to land. Not having their pro ratings, I walked out to the centre of the landing area (where one would normally land). Granted the wind had picked up, but nothing worse than they'd flown in before. It took a real effort on their sides to fly a fantastically long down wind leg, and then turn too late for final. Well there goes the close up pics, these guys were going to end up in the pro rated / tandem landing area at best....

And then that priceless moment came, Louis in the trees. Nothing better than f*cking up when your choms are around, happily clicking away. He did an epic job wrapping that canopy around the tree. 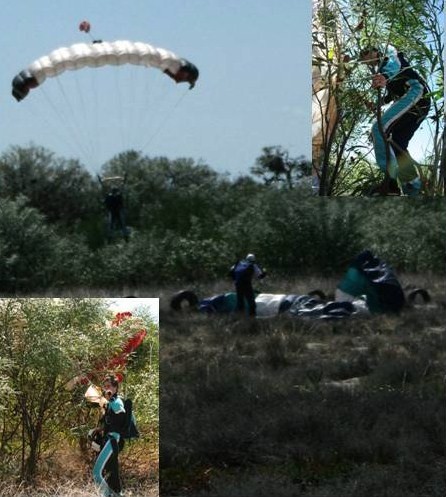 And with this display of awesomeness we now have a fines board at the dropzone. The board will be for f*ck ups and firsts. Lee, Louis, and Jason were the first victims for the following "achievements"